Our 1st Annual Rally In The Valley Pickleball Tournament was held Aug 24-26, 2012 at the West Albany High School.

See Tournament Pics in our Galleries

Our tournament had 96 players which seemed significantly to us.  With additional visitors we estimate we had 150 people at our tournament each day providing a significant economic impact to Albany businesses over the three days.  We drew players from all over the Northwest and from as far away as Edmonton, Alberta and Amarillo, TX plus many from the extended Willamette Valley from Vancouver  to Medford and Bend to Newport.   We played 66 matches Saturday and 74 matches Sunday on 11 courts. 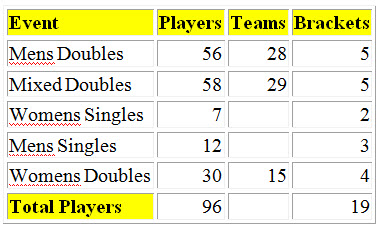 The project would not have been possible without help from our generous donors. Their donations to the tournement and/or court work allowed us to put on a very successful tournament and use the proceeds to further our renovations on the court.