(Overview:  Below is the article that Corvallis, OR ambassadors Bob & Connie Anderson submitted to the USAPA Newsletter of the Corvallis Pickleball group’s trip to introduce pickleball in China.  This post is intended to supplement the USAPA article as there is a limit on how long that article can be, so we are reproducing it here with some additional stories from the travelers themselves.  The stories are many and you can tell how much fun the group had on their trip.  This is  along post, so sit back and take it all in.) 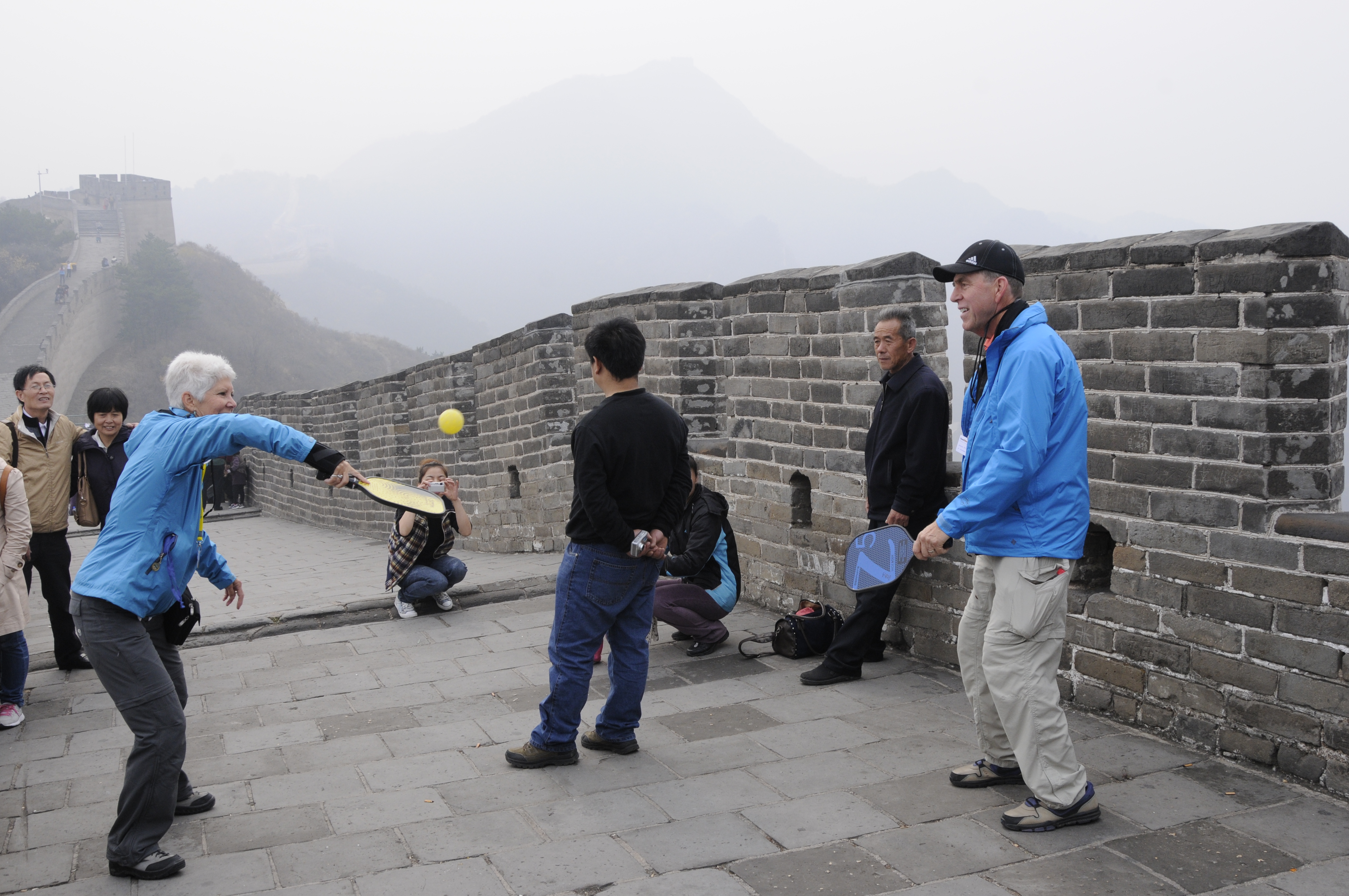 Six couples from Corvallis, OR, which included nine USAPA pickleball players, traveled to China this fall to introduce pickleball to as many Chinese people as we could. We took a portable USAPA net and paddles, which were all donated by Steve Wong of
S-Type Sports. (Thanks again Steve!) We demonstrated pickleball in Beijing, Xian, Shanghai, Guangzhou and on the Great Wall and on our ship on the Yangtze River. We were invited to ‘Guangdong Industrial Technical College to demonstrate pickleball. It was at this site that we donated the net and paddles we carried so the college could continue to teach pickleball to their students and faculty. 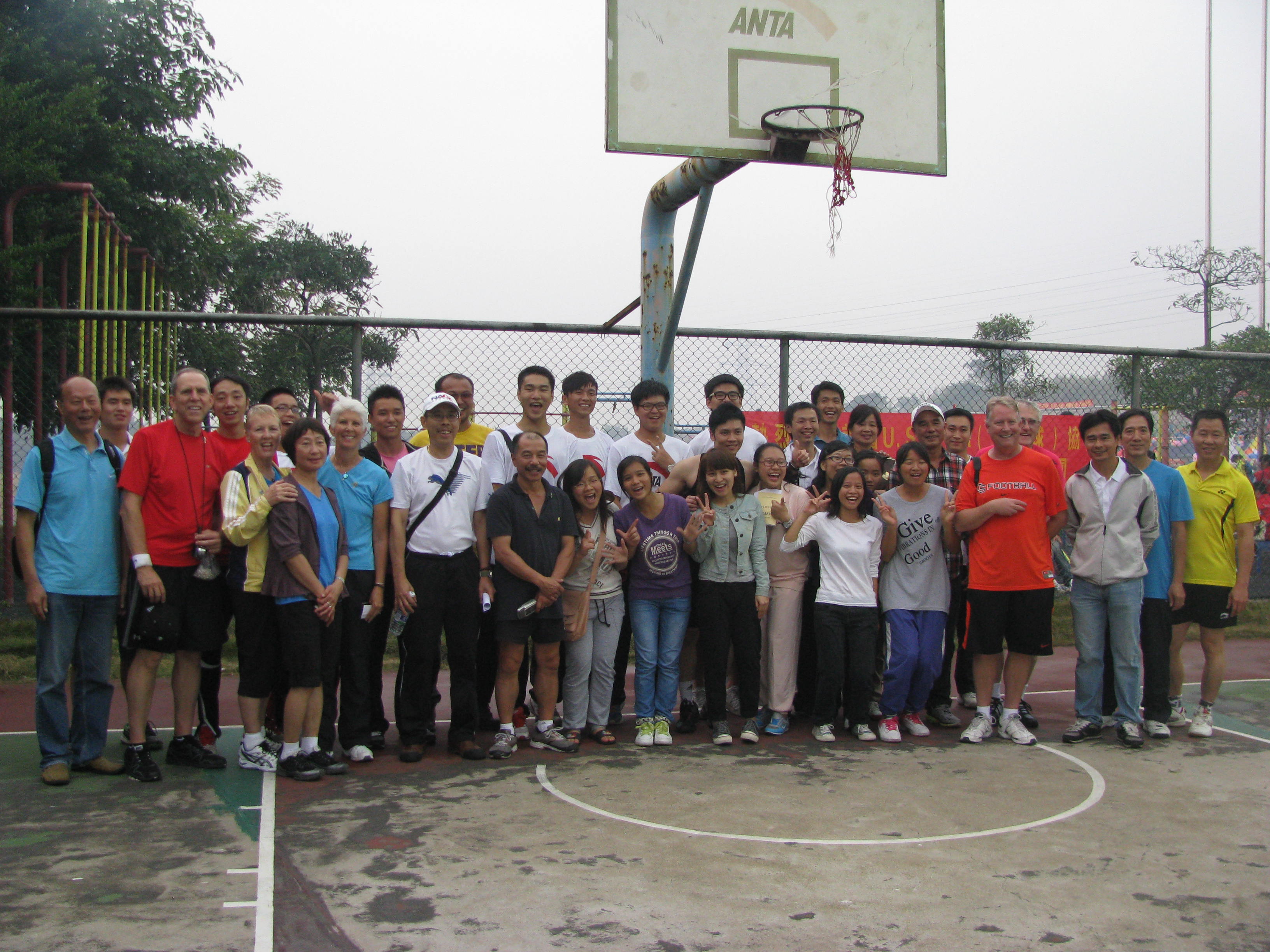 Our group with students from Guangdong Industrial Technical College

At every stop we found the Chinese people welcoming and receptive to pickleball. Even though we had interpreters we used a lot of “sign” language to explain the rules which brought many smiles and much laughter from both sides. By the time we finished playing with them we had made new friends. It was a wonderful experience and trip! 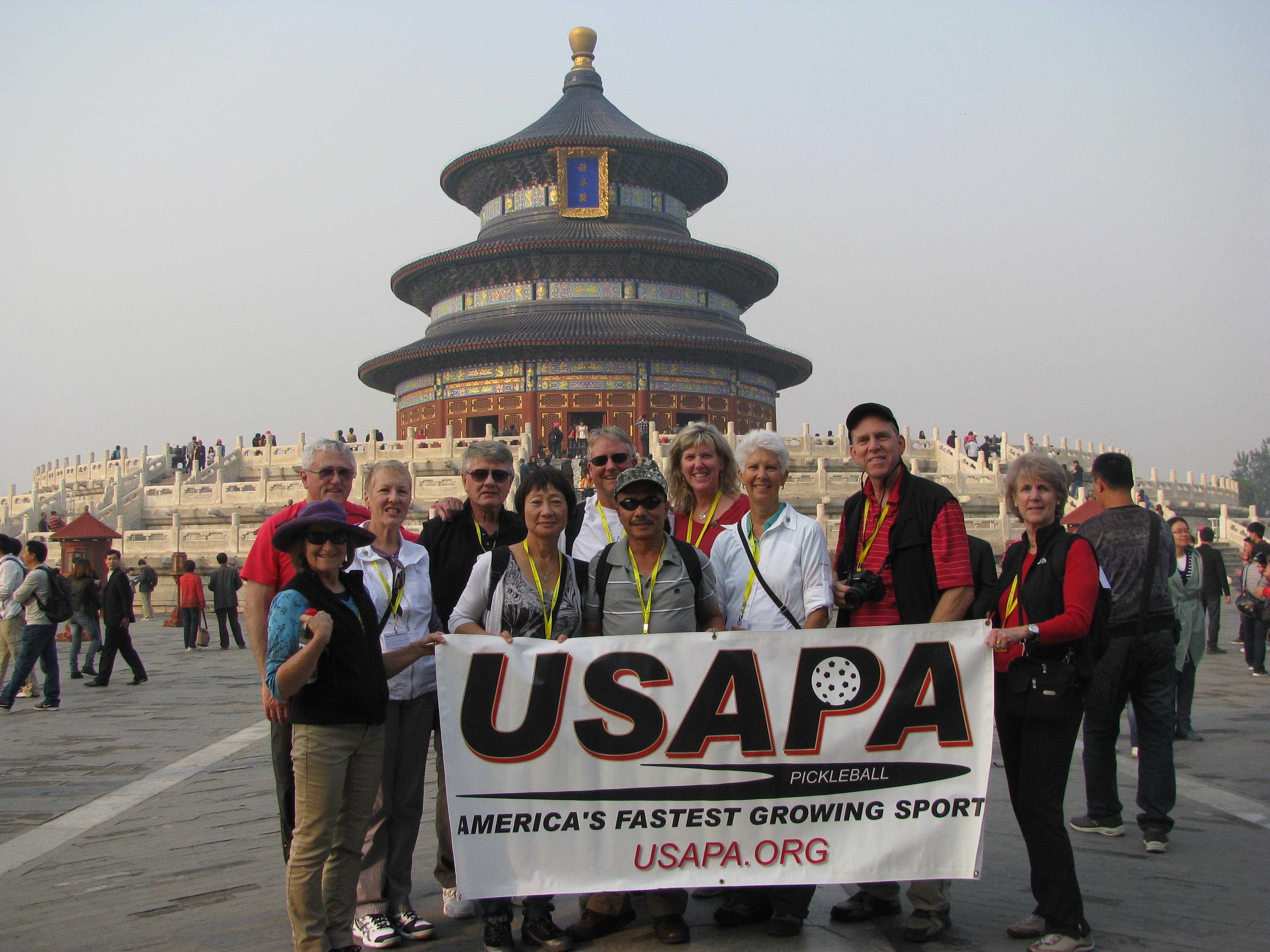 See our China Pickleball Trip Photo Gallery:  Rather than using the slideshow, click on the first picture and scroll manually with arrows to see picture captions.  Hit ESC key to exit photo gallery and return to narrative.  If you click on Slideshow, you may need to scroll back down to the gallery area to see the show.

Individual Stories of the Trip

We arrived in Tienanmen Square and wanted a group photo taken with our USAPA banner. We had just unrolled the banner and formed a group when a military person came running over waving his hands and motioning that we could not take the photo. Our guide/translator, Gloria, tried to explain who we were and what we were doing. He would have nothing to do with it and as we rolled up our banner he chewed her out for “letting” us do that in the first place. We felt very badly for Gloria as she was a very nice person. It was one of our first tastes of China and not very welcoming, but as the trip progressed relations warmed through the game of pickleball. Connie Anderson

Bob and I were getting ready to visit the Great Wall. During most of the trip Bob wore a “travel” vest which had a large pocket on the back. We went back and forth deciding whether we should take our pickleball paddles and a ball and “play” pickleball on the wall. Finally we decided to put them in the vest and we would make a decision once we were on the wall. No one else knew we had them with us. We climbed the steeper section of the wall to try to avoid the crowds. Our time was running short, we were still amongst people and were going to have to start down soon. Bob and I couldn’t leave the wall without hitting a few shots so to the amazement of our group and other people on the wall, we pulled out our paddles and a ball and hit a few shots. Our grou shagged the ball and took pictures with many other wall walking people watching and smiling. It was a highlight of the trip. Connie Anderson

Everyone has heard of the Great Wall in China but I never thought my husband and I would be standing on it watching our doubles partners, Connie and Bob Anderson, gently hit a pickleball back and forth to each other as other tourists streamed by.  Judy Rosenthal

When we were on our three day cruise down the Yangtze River we became very friendly with our on board guide, Daisy.  All Chinese young people ‘adopt’ an English name.  We talked with her about Pickleball and she wanted to learn.  On our last day of the cruise we were docked and ready to embark into the famous three Gorges route.  It was an incredible setting.  In the morning we set up our portable net on the top deck and began to play.  Somehow Daisy got word we were playing and literally invited all
the staff up to the top deck.  They were in their black tuxedo like outfits – high heels, bow ties, etc… and were playing Pickleball.  It was surreal to see how much fun they were having learning this wonderful game.  James Schupp

We had set up our portable net in various places in China but the most significant happening for me was when we set it up on the top deck of our cruise ship on the Yangtze River. As members of our group were playing the rest of us would recruit other people who looked like they may be interested.  I spotted a group of middle age women sitting apart but still watching the play.  I approached them and offered my paddle and pointed at them but each declined with a no-no shake of her head.  As I motioned individually to each one in the group I noticed that one women’s eyes had a glint of
interest.  I gave her my paddle and motioned for her to follow me.  Retrieving another paddle I bounced a ball on my paddle and motioned for her  to do the same.  Seeing how easily she did that I gently hit a ball to her and she gently hit it back and so forth.  Quickly I could see that this women was very coordinated and athletic so I had “Sue” replace one of the pickleball players and soon she was playing doubles and loving it.
After presenting her with a pb pin she invited me over to her group of women and it was then that an interpreter told me this group of  women went to middle school together and “Sue” had been their leader in middle school and she had organized this Yangtze River tour for them.  They all gathered around me anxious that I be in a picture with them.  After many pictures we parted ways but it wouldn’t be for the last time.  The following day, after disembarking from the cruise ship our pickleball group was touring the Three Gorges Dam when I heard “Judy, Judy, Judy” ringing through the air.  There were the women from the ship and their leader, “Sue”, again giving me hugs and wanting just one more picture of us together.  I don’t speak Chinese and my new women friends didn’t speak English but pickleball was our common language!! Judy Rosenthal

While in port, we set up our portable pickleball net on the top deck of our Yangtze River cruise boat. We played with guests and crew members alike. After playing with and coaching this one women, who was a tennis player, I presented her with one of our pickleball pins that we gave out to people we played with. You would have thought she had won the lottery! She had fun playing pickleball and when she received the pin she said, “Is this for me!?” Laughingly she said, “Oh, I’m going home and tell my friend, who plays pickleball, that I won the top prize in the pickleball tournament on the cruise!” She
reached into her pocket and presented me with a Canadian flag pin. We smiled at each other and then she hurried off to her group of friends to show them the pin and talk about pickleball. Once again, another pickleball friend was made.  Connie Anderson

In the beautiful city of Shanghai we left the hotel with our portable net and scouted for a place to play. We ended up playing in place near the subway. As people passed by they would look over the rail and watch. Slowly people came forward and wanted to know what we were doing. We showed them and the fun began. Off to one side a couple was doing some kind of dance exercise. As time went on, she moved closer to us and watched, continuing to dance. Then she would retreat to her original area, but slowly moved back to our area. Finally, she accepted a paddle from one of us and started hitting the ball. She liked it and politely thanked us when she left. One other couple played and wanted to sign that day to be pickleball distributors in Shanghai. We had to tell them we weren’t ready to start doing business in China yet. They were disappointed, but we took there email address and said we would be in touch. Connie Anderson

When we were teaching students at Guangdong Industry Technical College, one student started talking with me in very good English. I encouraged him to try his hand at
pickleball. He kept saying no, he said he was not an athlete. So we kept talking and watching the other students play for a long time. Finally, after much watching he decided he would give it a try. He was very nervous and didn’t hit well in the beginning, but our group kept working with him and sure enough a smile appeared on his face. He started to relax, have a good time and play better.  It wasn’t until later when we were getting ready to take group pictures and I was talking with him again, he mentioned that he was the student body vice president. He was very proud of that, but I could also tell he was very proud of accepting a pickleball pin that we gave people who played with us on the trip. He attached it to his shirt and stood proud and smiling for the photos: another pickleball player in the making! Connie Anderson

In Guangzhou (Canton) we were invited to play pickleball at an indoor  gymnasium normally set up for badminton. Several Chinese men associated with a sporting goods store and friends and relatives of one of our players (formerly of Guangzhou) came to
watch us play the game and to play themselves.  As several of them came into the gym we couldn’t help but notice all of the smoke that came in with them.  It seemed incongruous that they would smoke but then proceed to play pickleball to get healthy???  Later we were invited to stop by the sporting goods store. The owner showed us where he planned on displaying pickleball equipment when he became a distributor. He was sold on pickleball.  Judy Rosenthal